It's my first Chicago winter and I must say it's quite different from my Simple Savannah Winters. I moved in with Patrick on December 1st and by moved in I mean he flew down to Savannah, helped me pack ALL my things in a POD and we loaded up the car with the cats and drove the 16 hours back to Chicago. That experience was life changing. It was the first time I made such a drastic decision and did it. Well maybe the second time. I did just wake up one day and decide to get a tummy tuck. Yes. The second time.

It's officially a Snow Day in Chicago, meaning we're experiencing about 8 inches of snow where I'm at. Everyone at the office yesterday was trying to decide whether they would come into work today. Honestly it was one of those things where everyone was "trying to decide" but they knew. No one wanted to drive in this weather. I live 3 miles away from my job and there's no way I was going. I'm looking out the window now, watching the snow that hasn't stopped since yesterday and still a big NOPE.

Yesterday I had a bit of a panic attack. I made it home okay from work, the snow hadn't started. I was attempting to find parking on our street. It seemed everyone had gotten off early and already claimed their spot where they would be for the next few days. And I found a spot, well I thought I had. I went to parallel park and saw a sign tied to the light pole that said it was a temporary tow zone. Honestly what is that? So I went to move and my tires slid in the snow and boom I was stuck. I couldn't get out. I panicked and started to cry. I'm not meant for snow. This is new. I'm still getting used to driving this new car, which is way bigger than my Bertha. Then of course it starts to snow.

So what do I do? I call Patrick. He's working a 10, but he answers immediately. I hold myself together...at first. "The car is stuck. And I don't know what to do, and why am I even trying to drive, and I'm not meant to live here because obviously even trying to go to and from work is a challenge...." Tears. Patrick giggles in the phone and calms me down. "Hey, I'll change into my gear and be there in 15. Turn your flashers on, I love you"

He was there in 13. Pulls up on his bike. He rides it everywhere. I think that's why he loves this city. There's a huge cycle scene, way bigger than Savannah. And he's good. He's really good. Do you know how long it takes for him to get the car out? 2 Seconds. F'N Jerk. He walks me inside and then kisses me bye and bikes back to work in the snow. As soon as he gets back he calls me to assure me that what had happened was the cutest thing ever and he loved having me here, taking care of me. Even if his mustache was all wet from the snow.

Patrick actually was a quite cute vegan chunk about a year ago thanks to slamming 12 packs every day. I have supplied a cute picture of him I snagged, don't tell him. 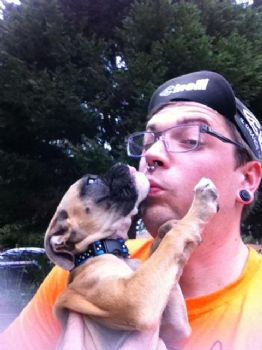 I'm really proud of how he's grown as a person, how much he's changed since I've know him. If you ever want to read my first encounter with Patrick in 2011 there's a blog on here called Learning to Love Yourself, I do believe. He's mentioned. Our story is wonky. I won't get into it. Not now. That's for another time.

Oh and here's our official Snow Day picture. My first one. Ever. 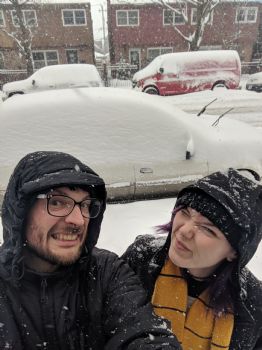 And another just because. 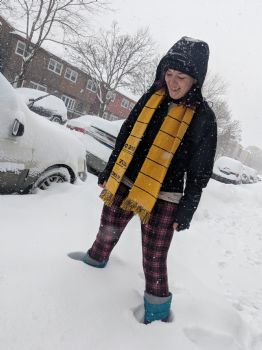