MY FOOD FOR THOUGHT

MY FOOD FOR THOUGHT

This may be a mundane topic for you, but it’s MY food for thought! So, here goes!

Just so you know, I moved to the Philippines this June from the U.S.
Buying fresh and healthy food in the Philippines is like I found candy in a candy store!
I no longer have to jump over hoops to buy really fresh food. I will explain later.

Here’s a little bit of my recent health history.
About ten years ago I developed an auto-immune disorder, then another, and still another! Thankfully, the past seven years have been good to me. I have been in partial remission. Ankylosing Spondylitis which goes hand in hand with RA took the same course. I give a lot of credit to the early aggressive treatment my wonderful rheumatologist took. That and my Tai Chi and swimming worked wonders.
Three years ago I developed Fibromyalgia. And I thought RA symptoms were bad? Fibromyalgia pain put my RA pain to shame!

There are still people who believe Fibromyalgia is a catch-all term used by doctors who can’t find a diagnosis for a cluster of symptoms. The National Institute of Health and the global medical-research network has confirmed Fibromyalgia is a neurological brain-based illness and not psychiatric catch-all term. Biomedical and genomic research is ongoing.

Fibromyalgia Phase I.
Three years ago I had my first episode of Fibromyalgia. It attacked my entire body (including my jaws). The pain was the likes of which I never knew possible. I literally felt like I was lifting 50 lb. weights for 15 minutes non-stop, when I was merely walking from one room to the other. Rest relieved the pain.

My rheumatologist put me on trial of couple medications. Basically, they were ineffective. I was not surprised since aerobic exercise happens to be the first line of treatment for Fibromyalgia.

So, aerobics it was! It was a battle of wills. Me against Fibro. Who would prove to be stronger and win the Queen’s trophy? The first few days were like hell on earth. The pain was so intense it was scary. I complained, made excuses and cried like a baby. It was Aerobic Bootcamp seven days a week. Improvement was gradual and took months. It sure was worth it. The pain went into remission and I have not had an episode since. And guess who won the trophy?

Fibromyalgia, Phase II.
Fibromyalgia also attacked my bowels. I’ve always had a cast-iron stomach and no food sensitivities. Desperate for relief, I began the slow process of changing my food choices. I used the elimination method. After a whole lot of trial and error, I found foods I could tolerate well and also keep my auto-immune system in balance. I no longer have painful digestive symptoms, the likes of which I will spare describing.

This is the same food plan I started several years ago. Granted, very fresh foods were not available in the U.S. like they are in the Philippines, but my food choices were basically the same.

I grew up on the Mediterranean Diet and continue to this day. It had no name back then. It was just what mom cooked.
I eat only organic whole grains, skim milk or 1% local milk, fresh fruit from local trees, and pure honey from bee farms around here. I never knew how delicious fish was until I came here. I regularly eat freshly caught seafood and fresh-water fish. They have plenty of supermarkets here, but I prefer the fresh market. The fish there are alive, they clean and package them for us. Freshly picked broccoli, al dente, and green beans and cooked carrots agree with me. Cabbage not so much (I shy away from gas-producing foods). I eat fresh-picked baby greens. They’re in abundance here. I do eat brown, black and especially the high protein wild rice. I love camote (sweet potatoes). I buy chicken pork and beef from the fresh market (no older than several hours old) and cook it the same day. I only eat chicken and meat in 2 oz servings two to three times a week. I sauté my food in a little olive oil, onion, and garlic. Once in a while, I add a dash of an herb or ginger.

Obviously, I no longer eat fast food. Restaurant food is contingent on my daughter-in-law's approval. She’s Filipino and the Queen’s taster and she hasn’t died yet.

A little bit about Filipino food culture.
Most traditional Filipino restaurants serve very fresh food, My only beef is their custom of eating animal fat as a dietary staple. Filipino food is delicious! There’s just one catch, they like animal fat. I find it hard to fathom eating a pork chop with two inches of fat cooked on the outside. Their stew looks scrumptious, but it contains chunks of meat with an equal of animal fat chunks. Fortunately, freshly caught fish and seafood are always on the menu. I understand Filipino history and the purpose it used to have for its people. And granted there are still very, very poor and hungry Filipinos who need to eat this way. But it’s 2019. There is a huge segment of the population who have no need to eat large amounts of animal fat on a regular basis and still do. Heart disease, strokes, and diabetes have become an epidemic here.

In defense, the Philippines is working on improving the health of its citizens. It is just a matter of time before the government legislates a comprehensive campaign mandating health programs in hospitals, schools, and the media nationwide. The U.S. has its own problems, too. It is my hope, USDA will one day address the issue of what is on our supermarket shelves and what our restaurants serve.

Change is slow. It’s human nature. Look how long and how difficult it has been to change our lifestyle as Sparkers? It sure doesn’t happen overnight, does it?

As always, keep on Sparking and NEVER, NEVER, EVER give up!! 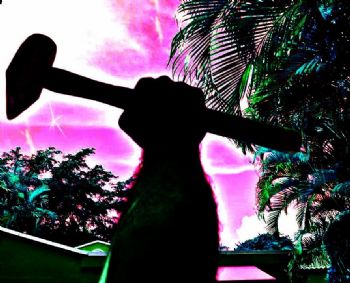