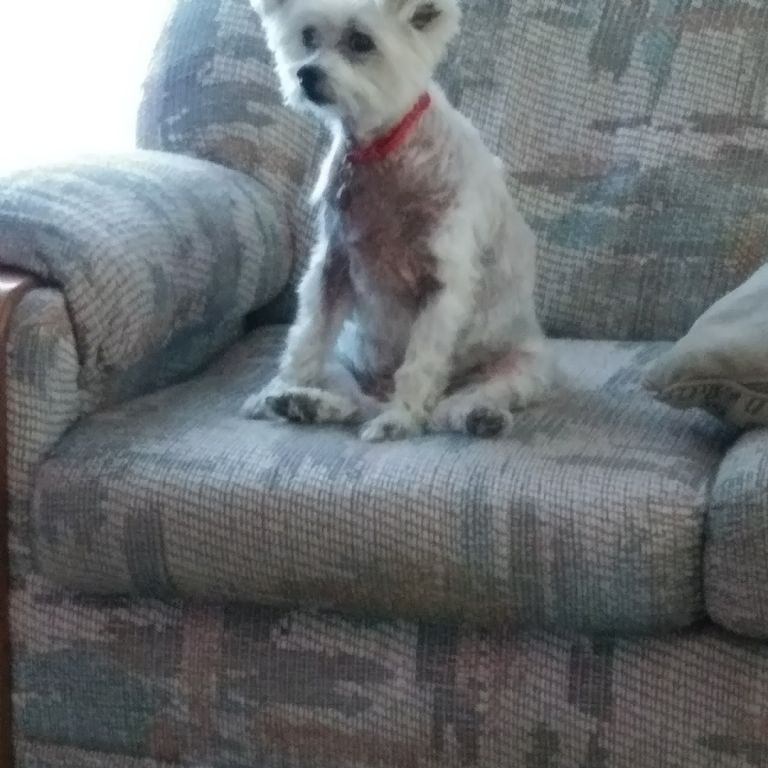 When I first saw her on the dog rescue adoption page I saw her and knew she was the perfect dog.....for my sister. My sister had lost her sweet girl poppy 2 months before and she was hurting. Without telling my sister I contacted the rescue. She was named Pixie, a hairy hairless Chinese Crested. My sister ended up adopting her. When Pixie came to us she was small and broken. She had been abused and neglected for much of her life. She had a luxated patella, ( the one health problem we could visibly see) bad hearing, bad eye sight, she had to eat special food(she was a picky eater....just like my sister's previous dog Poppy), had a bad back full of arthritis, and walked on her paws and ankles as only a few of the issues she had. She did not like to walk across our linoleum floors, she didn't look out the window on car rides, didn't like the grass and didn't like getting wet. She was feisty though. She would snap at you if you came too close to my sister and she was holding her, she would get upset and growl and snap at you if you tried to pick her up when she was on my sister's bed and sometimes would try to bite your leg. We had a behaviorist cone out and try to help and it did a bit. She was food possessive and person possesive. Eventually we changed her name to Koda, a good strong name. I always joked it should be Gertude because she was feisty, a little cantankerous little old lady, and you weren't sure of what you were going to get as I imagine people named Gertrude would be. The longer she was here the more she changed. She eventually got over her fear of linoleum, started to go into the grass more, discovered bunnies (our yard has tons of them), tried to catch them but never did. She started to want to look out the window on car rides. She was a funny little dog. She would whine at you when you first came in because you didn't say hi and then growled at you when you came over to pet her and say hi. Then she would whine because we left because she growled. She had a treat racket going. You had to "pay the toll " if my sister was in her room with Koda. You had to make a trail of treats off the bed to get her to go per because we were not mom. Despite all her faults she was a champion cuddler. If my sister was home wherever she went Koda was sure to follow, bathroom and all. If my sister was gone she would lay on her bed mostly but would do a growly purr type sound when you pet her or played with her ears. She would snuggle up tight to you and just stay. She had a sweet tooth. She loved cookies. When we made cookies you could see she wanted some. So we would make some just for her before adding in the chocolate chips. She would sit right outside the kitchen and stare at you as if to say, "Are they done?" I was making cupcakes for a wedding and the first batch was horrible. They were overbaked and a little dry. I gave her a piece and she liked it so I asked if I could give her more. When my sister said no more and I left with it she growl at me because I was leaving. She only liked her marshmallows toasted and growled when I didn't give her another marshmallow. I think of all the people food she got her favorite was pizza and glazed doughnuts. She would do a lot for pizza. She learned tricks, how to talk, give you her paw and touch her nose to your hand. She didn't want to hear me sing off key to songs when doing the dishes so she would leave. She couldn't see very well, and didn't hear very well, couldn't walk like a dog normally does so she didn't run, but if we said lets go get mom and leashed and harnessed her she was walked faster than you thought she could. She was diagnosed with an inoperable brain tumor in her ol' factory area of the brain a few months ago and she started to decline. Her esophagus wasn't working right and the valve wouldn't close so she was aspirating water in to her lungs and she caught aspirative pneumonia. We took her to the emergency vet because she couldn't breathe. She came home 2 days later and seemed to be doing better on her medication they gave. She started to not eat very much the last few days and although she was feisty and a fighter she left us today. I don't think dogs get obituaries, but this would be hers if they did. She wasn't with us for more than a year and a half, but the hole she left when her body gave up is so much bigger than she was. I know this was a long blog but I needed to write it all down.
Share This Post With Others
Report Inappropriate Blog
Member Comments About This Blog Post