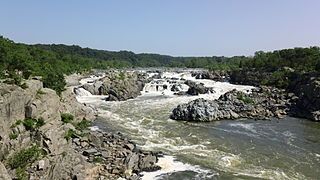 Picture found on Wikipedia
Photographer: NortyNort under Creative Commons SA 3.0
No alterations were made to the photo

From the "Gifts, Blessings & Miracles" series

One Saturday, my sister, her family & Mom, Dad & I went to Great Falls in Maryland for a picnic. After we ate my brother-in-law Ken & I decided to go exploring down by the river. The others stayed up top to just relax & chat.

Ken & I followed a path down the bank & started walking down river. The Potomac river was running high because of spring rains, & it was roaring around & over big boulders in the water. Finally we came to where there was a large boulder sticking out of the water about 3 feet from the bank. The water was so loud it made it hard for us to hear each other talk, but Ken hollered something to the effect of “I’ll jump to the rock if you will.”

I had on penny loafers with slick leather soles, but couldn’t resist his challenge. I had always loved seeing how far I could jump anyway, so didn’t think twice about doing it. I turned around, crouched & jumped. When I landed, I turned to see Ken getting ready to jump.

He crouched & jumped, but his shoe only hit the rock & slipped off.

In horror I watched as he was swept down the chute of water. His face face showed desperation & he reached his hand toward me for help. But his hand was already farther than I could reach.

"Oh, Lord, please..." was all I had time to say as I fell to my knees and reached as far as I could. Ken’s hand stopped, then began moving back up stream, till I finally was able to grasp it. I pulled with all my might & slowly pulled him out of the water.

It was only many years later that I began to go through the details of that incident.

2. He was already out of reach when I held out my hand.

3. You don’t come back up stream against a raging torrent of flood water…at least you don’t at Great Falls. Those waters take an average of 7 lives each year of people who underestimate their power.

4. Ken was fully dressed which added drag & weight to the pull. Besides, the water was trying to shove him back down stream.

5. In reality, only an angel could have pushed him up stream & pulled him out of that water.

I was privileged to take part in what happened, but only our angels could have saved him.