Anyone who knows me also knows that I am not a fan of exercise. But, I know very well that in order to be able to keep moving, we have to keep moving. While I've been pretty awful about doing this on a consistent basis, I've had spurts when I managed to be more diligent. In particular, the 5% Challenges have helped, as well as being on a competitive team (I'm currently on the Spirited Underdogs team).

I have been married for over 55 years to a wonderful guy who has been a rock and steady presence in my life ever since our blind date way back when I was a second year nursing student. Richard's 5 years older than me, and while he grew up on a farm and was physically active working on the farm at an early age, as well as being an athlete who had a horrible time giving that up as he got older, in recent years, he has become very much a recliner potato. Hard work and athletics helped him to develop severe arthritis, and he's had multiple joint replacements (both hips, both shoulders, and surgery to fuse an ankle). He also has two bad knees now. He recovers well, but sits--all the time. Until now!!!

We have a brand new beautiful Y that just opened a few weeks ago. Our Medicare coverage includes a membership to the Y. Richard must have gotten tired of me asking him to go with me because he finally agreed. Masks are required to enter (we wear ours all the time regardless, as neither of us is working out hard enough to need extra air...LOL). The walking track is perfect for us. Each lap is 1/8th mile. Because Richard's mobility is so limited he decided to use his metal crutches in order to stand up straighter and to have good support when he needs it. Because of his competitiveness in athletics, it was a hard sell that the goal is not for him to go as fast as possible, but to just keep moving. Our son helped convince him of that, as well. Neither of us sets any speed or distance records, but dang...he's moving and I'm moving. Granted, we only get there every other day, but it makes me so happy and he hasn't quit yet. Here he is finishing his 4 laps (1/2 mile). I'm up to 10 laps...yea for me, too! 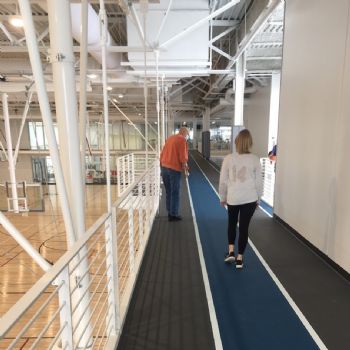 I know it's hard to see, but I just wanted to share our progress. I'm so proud of him...how can I not keep moving when he's making the effort!