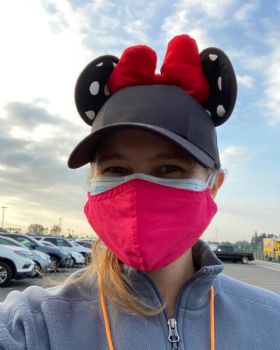 This was Thursday, Tacy's last day at the Disneyland Super POD for the Corona Vaccine. She loved her two weeks here. They vaccinated the 75 and above. She met a lovely 86 yo that she made a date with to take her to Disneyland when they open again. Betty's kids won't take her but Tacy would love to spend the day with her (they were together an hour as Tacy escorted her thru the procedure as she came alone and needed a wheelchair). The County Disater Response got it up and running and now they have temp workers at the site, many unemployed Disney workers.

On Friday Tacy came to SB for the holiday weekend and we just stayed at the house, cooking. She was disgusted with how our county is vaccinating. In LA and Orange, they had done about 10% of their residents. SB has done 1%, people over 75 are getting appointments in June. But the state tiers are open to 65 and over. So Tacy got to work checking all the sites she knew. Over the weekend there was nothing and she returned home Monday nite, at 5:30 AM Tuesday she called us with the news that the State Super Pod in Carson had appointments and we got two, there were 13 left after we got assigned. So Tuesday morning we hightailed it to Carson by Long Beach. We arrived 45 minutes before our appointment and 2 hours later got in the Stadium lot and finally we got our shots. We were just 15 miles from Tacy's so we went there to spend the night and drove back yesterday, a leisurely drive.

We stopped in Malibu for gas at a station that also had a Taco Bell attached. So we picked up lunch. This is the prettiest view I ever had eating Taco Bell in my car! 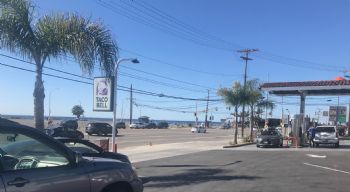 There was a solitary skateboarder in that lot across PCH- generally that lot is full to the brim!

Then onward to Malibu Bluffs. This is Wiley's stop and he gets quite excited as we head up the hill. 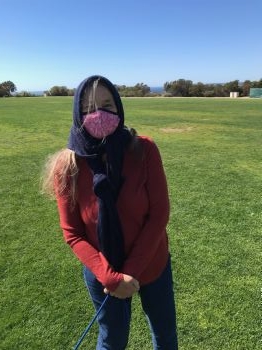 He is at the end of the leash.

And here is the 101 heading up to Santa Barbara, where the moutains meet the sea 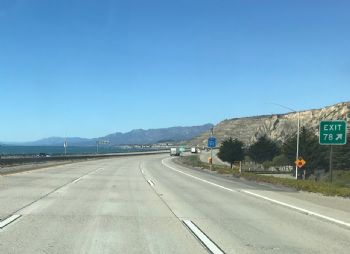 So it was all kinds of a whirlwind and Jeff was extremely stressed. He is the one who does all the driving, shopping and errands into places. We know at least 25 over 65s in SB that have headed to LA for shots and our doctor was very happy to hear we got the first one

Added note: The State Super sites at this point any one over 65 is eligible for the vaccine, residence did not matter, the guy in the car next to us was from Utah- where jeff was born and the majority of his relatives are, so they chatted back and forth when we'd catch up with one another as the cars moved - the line into the stadium was 2 lanes, 3 miles, lots of police keeping order.