Two hormones are known to create weight gain no matter how well you are eating and exercising. This has been shown repeatedly in thousands of clinical cases (e.g. Drs give them to people and observe the results), maybe research (I haven’t looked at this), and is known by many Drs and even printed as warnings on some of the medications as a “side effect”.

Those that know me, know that I get high cortisol (I have been tested, my big triggers are food allergies and long days that are not stressful but no breaks/downtime). Note: Cortisol raises depending on what your specific body perceives as stress - we are all individuals, so what raises mine may be very different than what raises yours, your friends, or your neighbors. I work to manage my cortisol, but over the years it continually has gotten more difficult to control - as other hormones changed (e.g. moved into menopause).

My blood sugars have always been low my entire life - even 8 years ago my fasting blood sugar was 70 consistently and I rarely went above 105 (playing with a finger stick tester) even after eating a carb heavy meal.
However, my more recent fasting blood sugars are closer to 90, which was well within "normal" range but pretty high compared to my previous “normal”s.

I have been told (by a biological engineer friend and confirmed with a clamp test) that I am the opposite of insulin resistant - called insulin sensitive (different than the term insulin sensitivity). That means that I get a normal blood sugar spike, I get a normal insulin spike, but then my body has a very strong reaction to that normal insulin - as if I have high insulin. I have had hypoglycemic symptoms my entire life though I never tested as hypoglycemic, and I always got an instant sugar low with no sugar high.

I now think what I am changing with my recent efforts is lowering insulin and this is not only reducing inflammation but also now creating weight loss (whereas I was stalled for quite some time). My Drs rarely checked fasting insulin despite the fact everyone should have these regularly (GYNs and endocrinologists were the ones who tested this). I checked the test results I had and in the early 2000s, I was at 25-30% of normal. In the early 2010s and 2000, I was smack in the middle of normal (with a pretty wide range). So they have increased over time. I didn’t have them taken when I was a young adult so I really don’t know what my “normal” is.

Unfortunately, there is not a reliable at home tests for cortisol or insulin. The best cortisol one is a saliva test done 4 times over a day to see the pattern. The only insulin one is a blood test at labs and I recently read that this is not real accurate. However, there is a relationship between ketones and insulin (generally if ketones are higher than insulin is lower). So I am making educated guesses on insulin by tracking blood sugar, ketosis levels, my cortisol symptoms, and my other symptoms (water retention inflammation, etc.).

How I got to where I am now and charts/graphs of my progress.
A few months ago reviewing DH's blood sugar we again saw he just couldn't get lower than that pre-diabetic level (100-105) fasting blood sugar no matter what he changed (food, exercise, etc.). So we got him a CGM (continuous glucose monitor) and a fancy program with great feedback. This made huge differences for him on several key lab results as well as weigh loss (I did a previous blog on this).

I got the same CGM without the fancy program (did my own analysis) to try see if it gave me any clues for my weight loss which had stalled the last couple years.
I also had the goal to get back to my “normal” fasting blood sugar of 70.

My baseline blood sugars have lowered the last few months which likely means insulin probably has also (I have a test coming up soon to check this). However, eating protein will increase insulin without increasing blood sugars, so blood sugars are not directly related to insulin levels. And I have (and do) eat higher protein (traditionally roughly 30% of calories and 100-120g) since about 2010 as higher protein helps manage my cortisol.
I think my recent lowering of insulin (by lowering blood sugars and blunting protein insulin spike with fiber) is what is creating consistent weight loss for me as that seems to correlate to weight loss more than anything else I am doing (it correlates more closely than just blood sugar or just high cortisol or if I am in ketosis).

Using a Continuous Glucose Monitor (CGM) I figured out some very helpful information. This included:
-- What foods spiked my blood sugar (some I was eating I thought were ok and were not, and that once a week treat would raise my baseline blood sugar by about 10 points for 3 days straight).
-- What food combinations worked for me so my blood sugar reactions are fairly flat.
-- I also found out that at least some of my food allergies showed in the CGM as a big sugar spike (when cortisol goes high it can pull up blood sugar and insulin). This happened even when I didn’t feel the cortisol go high.

So I eliminated foods that didn't work for me. I also eliminated all cheats as the cost for these was too big (affected me for days). And I eliminated some foods I knew I reacted more to even if I had not yet tested them.
This actually changed my food plan from low carb to very low carb.

Several nice side effects of eliminating these foods, my gums in my mouth became much healthier, losing that tiny bit of inflammation they always had. My allergic reaction to nickel (in stainless steel) dropped to about 10% of what it previously had been.
I quit doing the crazy gain/lose 2-4 lbs overnight that I typically do, which I had attributed to cortisol but might really be insulin.

I watched my weight loss/gains and looked for potential causes (tracking cortisol, got a ketosis blood tester and used that, tracked food occasionally - I eat the same most of the time, tracked sleep, etc.). I had some loses but I could not predictably say what would cause predictable weight loss. Sleep didn’t predict it, blood sugar (average or time spent under a certain number) didn’t predict it, cortisol being higher or lower didn’t predict it. I was at a loss.
But I continued to push to get my blood sugars back to my normal.

In an effort to lower blood sugar more, I started doing some IF (intermittent fasting). I have, probably my entire life, done something close to a 8 feed, 16 fast. In my first tries with 24 and 36 hour fasts I got a nasty backlash from cortisol spiking. And that showed in my weight.

I backed off to OMAD (one meal a day IF) but I still struggled. I typically ended up eating a snack. I felt like I was eating a ton of food (typically two “meals” within 2 hours) for my OMAD to get enough fuel in my body and I was stuffed for hours afterwards (none of that was pleasant for me).
After a week of OMAD, I added bone broth (figuring that adding protein would help manage my cortisol). Initially the bone broth was too salty for me, so I did 4 oz of bone broth and added some gelatin to it. I also added some chai seeds, figuring the fiber would help with blunting the protein insulin spike. I found a research study that confirmed fiber (they used psyllium) blunted the insulin spike (e.g. lower spike and not as long) even better than it blunted the sugar spike. This second week went much easier and I didn’t need snacks to get thru the day. I even had some chia seeds with my meal to blunt that protein spike. My meals are protein and some fat and some veggies (too much veggie will spike me, so I keep the amounts less - a cup or two if leafy veggie, all my veggies are at least lightly cooked as that works better for me than raw veggies).

I found for me, it works best to have 3 bone broths (with gelatin & chai seeds) a day plus some chai seeds with my OMAD. However I don’t always get that much in. AND, with the bone broth drink I can now do 24 and 36 hour fasts without a backlash from cortisol spiking.

My weight loss is now more consistent. Except for a nasty reaction to my first vaccine shot, where I ran a low grade fever (a hot body makes blood sugar go up - whether from fever, exercise, cooking over a hot stove, etc., so my blood sugar went up as did symptoms my insulin was up). I also have has some additional health benefits. My biggest menopause symptom has been muscle tension. I take magnesium (along with other vitamins/minerals which high cortisol depletes) which helps a lot but at some point in the last couple of years I added daily Advil. I have been able to stop the Advil (about 2-3 weeks into doing OMAD). I have only had to take it about 2 times in the last several weeks which is a huge improvement. I am guessing this is because my hormones are balancing out, time will tell.

Below is charts on my progress so far. First I got a big loss (water weight I am sure) as I lowered my blood sugar & insulin.

Then some ups and downs trying to figure things out (like how to lower my blood sugar).
Then trying OMAD (one meal a day) and struggling and the results not really showing.

But week 2 of OMAD (adding in fiber and protein drinks - bone broth & gelatin), things got better and I started dropping weight, about 3 lbs a week consistently. Until I got the covid vaccine, and ran a low grade fever for almost a week). But I expect to start losing again (I have already lost what I gained while struggling with the vaccine).

While I can't say for sure what is causing the weight loss (I can’t test insulin or cortisol directly), but you can see (chart below), that there are days when I am in ketosis but not losing weight (especially more recently when I was reacting to the vaccine shot), so my bet is I am losing weight because I am lowering insulin. I wish I could test insulin directly, but at this point that is not possible. 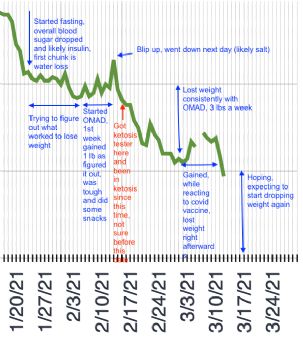 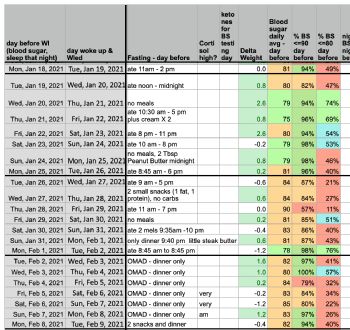 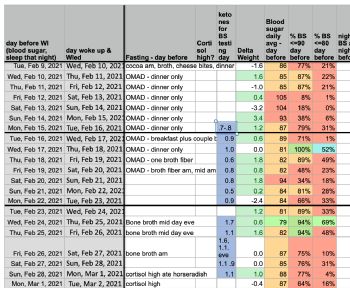 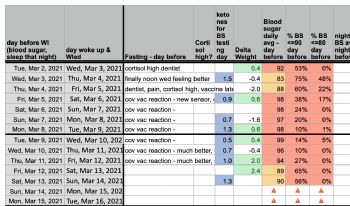