In my last blog I alluded to some troubling things going on in the lives of people I love. One of those things has definitely come to a head. Our daughter, Juliana, and her husband, Jeremy, have been married for almost three years and are expected their first child at the end of August. Since finishing college, Jeremy has been farming, working for his dad on the farm inherited from his grandpa. It's all Jeremy has ever wanted to do. I will try to condense a long, sad story into a few words. Although he inherited a prosperous farm, Jeremy's dad, through a combination of bad decisions, low grain prices, and two years of flooding, has run through every option and has gone into bankruptcy. In fact, worse than bankruptcy because he was late with a payment, and yesterday all the land was foreclosed on and sold by the bank. There are too many details and plot twists to share here.

These financial troubles have dogged Juliana and Jeremy throughout their marriage. Although they are not involved directly in the bankruptcy, Jeremy was leasing quite a bit of land from his dad this year and had already paid half of the rent, which is now gone to the bank and can't be recovered. The land has sold and Jeremy will not be farming it after all so there goes his income for the year and all that he has already invested in it. The only way he can recover the money is to sue his own father as a creditor in the bankruptcy process.

To make matters worse, Juliana and Jeremy live in a house on one of the farms that was sold and will probably lose their home too, as will Jeremy's parents. I don't mean to make it sound as if they will end up living on the street--Juliana has a good teaching job, Jeremy had two people call and offer him a job on the very day of the sale, and they are young and will make it through this. But it has been incredibly difficult and stressful for them, especially at a time when they are starting a family. Prayers for their well-being and future would be much appreciated.

In other news, Rick (DH) ended up in the hospital last week with a mystery illness. At first we thought it was a bad reaction to his second covid vaccine, but it didn't happen until 2 1/2 days later so that was ruled out. Then they decided it was a virus. Finally, we learned that it was, of all things, food poisoning. He is back at work this week and feeling fine, thankfully.

It has been a strange, slow spring. We have had two snows in the last week. Everything is absolutely full of buds and should be beautiful, but tonight temps are supposed to get down into the low '20s and I'm fearful for what that will do to the wheat crop, as well as all the beautiful blooming trees, shrubs, and flowers. Here's a pic of the view out of my home office window--Mom and Dad had planted a whole row of crabapple trees and they are gorgeous. 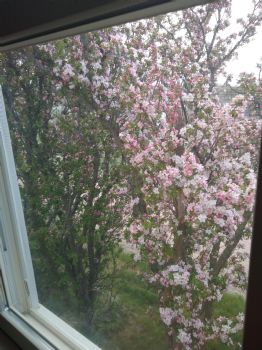 A project Rick and I finished this spring was rebuilding and painting this arbor. Our son James built it as a 4-H project when he was about 14 and gave it to his grandparents. Now that they are gone, we have installed it at our place in a new rose garden I'm creating. I've got 13 David Austin roses on the way to climb on the arbor and fence and provide the backbone of the border. I can't wait! 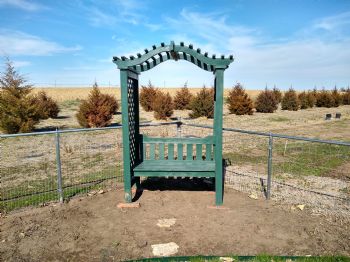 This is my final semester of Seminary! I had a huge paper to write and got it done last week so I rewarded myself with a trip to our local nursery. Here are the results! 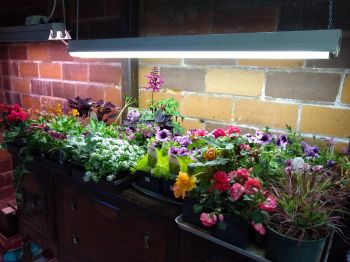 I feel I should end on a positive note by saying that Juliana and Jeremy have long-term plans now that include moving near us and farming our land. The land is currently leased to some great tenants and we won't take it away from them but they are getting close to retirement age. This is probably two years down the road and a lot of things need to fall into place, but we are all thrilled that we might live near each other. It is so exciting that I'm a little afraid to believe it will actually happen!