Yep woke to snow coming down..after raining nearly all day sometime during the night it turned to snow. A heavy very wet snow, means lots of moisture...hurrah. By noonish it was all melted and will begin the process of soaking in.
I had for the third time an appointment to have Mama Kitty groomed. Each time there has been a weather incident..I am going to have to suggest a Surprise drop in to get her there I do believe! However rather glad she is not shaved right now as indeed it would be a bit chilly! We did have a fire blazing all day today!
The chickens stuck their lil heads out and basically said..nope not me!! The geese slip slid and galloped over to the pool . Jumped in as if in celebration and set up the biggest fuss. Whether they were complaining or singing praises I do not know, they were however very noisy!
Molly loves this weather and was happy for part of the day out on her deck just watching the neighborhood and occasionally letting any wandering critters know ..This is My Home..move on! Dutches loves the snow..she was out and about enjoying the moment. Next time out it was mud to which she says..ahhhhhhhhhh NO!! It is so funny to watch this big ole Pittie pick her paws up and look at them with a "ewww yuck" look on her face, she seriously does not like mud between her toes!!
The cloudy days and cool temps led to both Angela and I taking midday naps. I was working on a sweater thankfully when I dropped both yarn and needle it was the round type so did not lose any stitches . Now to see if sleep will visit me tonight!! My knee acted up today so chair exercises were the portion of the day. I keep hearing Jim saying...growing old ain't for sissies kiddo!! He certainly knew what he was talking about. Golden years..maybe for the clinics, docs and pharmacies!! I am certainly pushing the kids to save , put money in 401K or some such...and do not touch it. They will need it in years to come more than they do now.
On a pleasanter subject..oh how green and bright all the trees , bushes and grasses are. Sadly the weeds also love the moisture..but at this moment after winters blah..anything green and growing is appreciated, will sort the good stuff from the other later on when I am in a more picky mood!
Nightly check in by my son ...done..good talk and good night from him. Think I will head that way too...ya'al have a good rest, peaceful sleep and wake to a day filled with positive thoughts and actions! 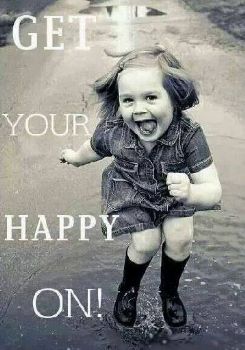