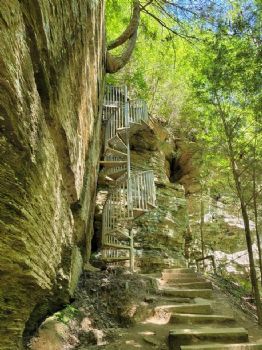 Good morning friends...Yesterday we took a 90 minute drive to South Cumberland State Park in search of waterfalls and fishing holes. Beautiful blue skies, no traffic away from the noise of the city, a lovely soul filling day...more so for me than hubby though.

The waterfalls that were "easy" to get too were not, except for the first one which could be seen with an obstructed view from the top...so I hiked he relaxed, it seemed innocent enough at first then came the rocks which led to the suspension bridge, not a long hike but tricky and a bit slippery.

After the first one we were hungry for lunch...breakfast light and fit yogurt and mini banana but muffins. Only place we could find open was a Mexican restaurant...not one of hubby favorite choices...I love it. Chips and salsa delicious, too many I'm sure. I ordered the pork carnitas seasoned in a bbq sauce with pineapple pieces, scrumptious ate 2 gave 3rd one to hubby.g

Then off to spot #2...hubby found a spot under the trees and took advantage of the cool breeze and off I went. Another hike that starts off seemingly easy then rocks, then a metal spiral staircase, you you heard that right, then wooden steps to the waterfall and swimming hole. I only descended halfway, took some pictures then turned around. A family with several small children were making their way up and I decided it best to be in front of them rather than behind. I was rather surprised honesty that small children including infants had taken both the trails I had been on so far.

Then off to our third and final waterfall hike very, very short but still early a bit much for hubby still recovering hip. We are The blueberry donut holes we had bought at 711 in the morning on the way. He waited as I made my way down and back, to the small but pretty falls.

We did take a stroll to the look out point, the path was relatively flat, partially paved and he was able to go a little more than a mile roundtrip. Sadly he couldn't find a decent spot to fish so he didn't cast his for at all. But there were hearts at every stop we made.

GPS took us home through some back roads for about 25 miles so we enjoyed the scenery. We were tired and didn't know what to eat, being father's day we weren't sure if options...so pizza...We failed to notice the pizza hut like set up...I ate it anyway...too tired for plan b. Poor guy, no fishing and mediocre meals...but despite it all, we had a fabulous day.

Definitely felt the difference hiking with sugar and salt as opposed to healthy protein and fresh fruit fueling me.

Well I'm gonna run...time to get ready for our last day here. Have a magnificent Monday...Namaste. 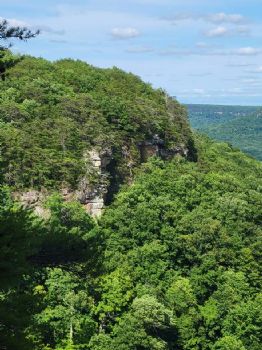 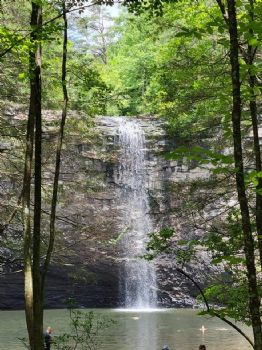 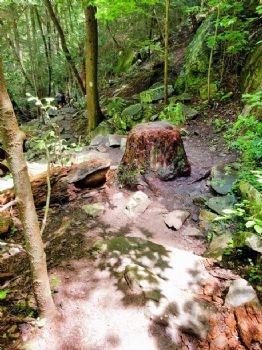 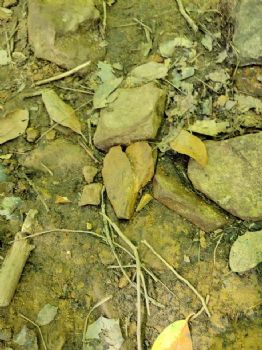